I could pretend this newsletter is a couple days late because we’re testing open rates by weekday — as covered in the Email Benchmark Report 2020 that just came out from Netcore — but that would be a convenient rationalization (turns out that Saturday pretty much takes the cake as ‘worst day to send’ for every industry…oops).

In reality, there were just too many other things going on earlier this week. But if 2020 has proved anything, it’s that sometimes life doesn’t go according to plan. So without wasting time further, let’s get to this week’s links!

PS, one of those ‘other things’ is a webinar I’m co-hosting next week with Peter Rogers from Merkle, How to Reach Apple’s Users in a Privacy-First World. We’ll be recapping the latest on iOS 14, and discussing how it fits into the broader trends of identity fragmentation on the web. It’ll be good, I promise.

Freakonomics is one of the smartest podcasts out there. This episode is the second in a series (the first focused on TV advertising), and asks some very tough questions about the efficacy of digital ads. There’s a particular focus on branded search, including a discussion on the now infamous eBay incrementality experiment.

The final takeaway isn’t exactly cut-and-dried either way. But on this topic, there’s clearly plenty of room for spin from both ends of the spectrum…and the Freakonomics crew (as usual) does a good job of providing a pretty reliable and impartial perspective on the ROI angle, without getting caught up in the ongoing user privacy debate.

(There’s also a full written transcript, for those who prefer reading to listening)

A High-Level Framework for Thinking About Paid Marketing for Apps

Speaking of advertising, if you’re just getting started and want to maximize your chances of avoiding the most common traps, this article is a great place to start.

Even better: the author practices what he preaches, and publishes this fascinating public dashboard that surfaces all the performance metrics from his own app portfolio.

“I've heard from a credible source that Apple will enforce ATT in iOS 14.4 starting in March”

This latest update comes courtesy of Eric Seufert, who has become one of the leading intelligence sources on Apple’s upcoming plans around the iOS 14 privacy changes.

While this is hardly confirmation, a March timeframe would fit with what we’ve been expecting at Branch — it’s actually a little bit on the later side.

There’s not much public detail on this beyond the headline (yet), and since it’s Apple, there may never be (though there’s a perspective here saying that this is a[nother] direct attack by Apple to wrest app discovery away from paid user acquisition, and put it back in the hands of the App Store editorial team).

Personally, I can’t see this move as anything but a positive for the ecosystem. Josh Elman has years of hands-on experience with the challenges faced by app developers, and has been involved in this very Mobile Growth Community for years.

In the last issue, I mentioned that Apple’s new M1 Macs stand out because they also run iOS apps natively.

Here’s a writeup (with examples) of the work needed to adapt an iOS app to run smoothly on macOS. TL;DR: it took about the developer about an hour, total.

As Antitrust Pressure Mounts, Google to Pull Back Benefit to News Sites That Adopted Its Preferred Mobile Technology

When Google introduced the AMP project several years ago, they put a thumb on the scale to drive adoption by giving AMP articles ‘first among equals’ placement in search results.

Next spring, that thumb is (finally) scheduled for removal. Now publishers have to decide whether they’ll continue using AMP, and if not, how to excise it without destroying their SEO investments.

It sounds like this was more of a fact-finding meeting by the FTC, and it doesn’t seem to have impacted Apple’s strategy (given they haven’t announced any further changes, and recently published an open letter recommitting to their stance).

QR codes for window shopping. It’s not a novel idea (Tesco tried something similar in South Korea for grocery shopping while waiting for the subway way back in 2011), but when the local music retail store/school starts trying it, you know that COVID is helping things cross the adoption chasm.

This thread is a mini-case study breaking down the implementation details behind Duolingo’s growth and retention strategy. Plenty of inside insight on the various iterations they tried, and the resulting successes (and occasional unintended consequences!)

I’m always a fan of projects to document app UX flow for easy reference, and the folks App Fuel (which just launched this week) seem to have a great thing going.

Speaking of Duolingo, here’s their analysis of its onboarding flow.

In case you’re keeping a list, here are a few other, similar resources: 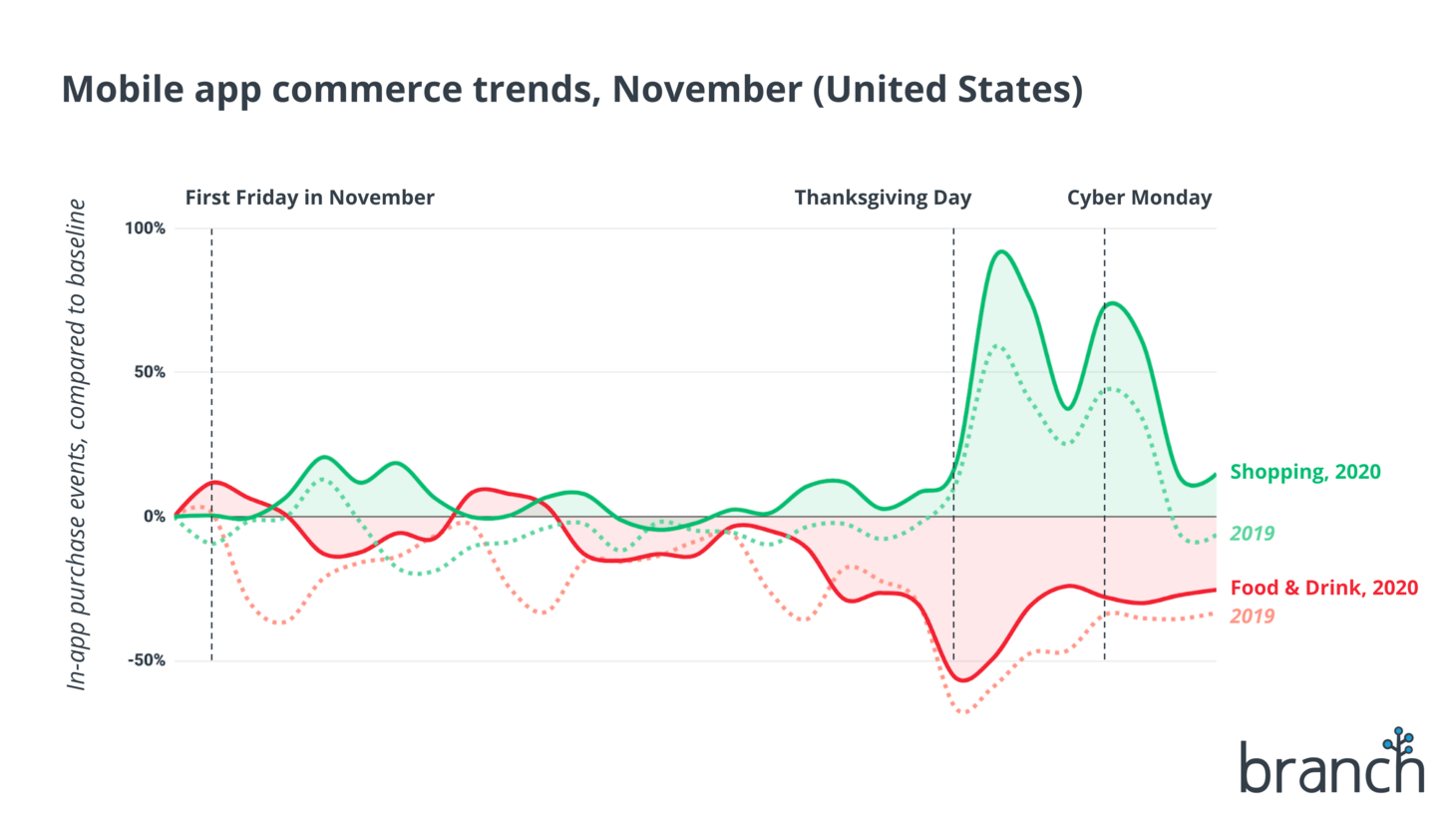 At the beginning of the 2020 holiday shopping season, user behavior reflect the impact of COVID while still following typical annual trends.

Purchase events in shopping apps spiked on both Black Friday and Cyber Monday (and higher than in previous years), while food & drink apps were significantly down on Thanksgiving Day itself.

For the other three graphs in this series, see this Twitter thread.

So much of learning how to drive meaningful growth is finding unsaturated and ripe growth channels and relentless focus on the actual end-user. This is our next guest's philosophy, Dharmesh Gandhi, the Senior Vice President and Head of Product at RentoMojo.

Dharmesh shares how early in his career at Amazon, he learned how you could easily spot what seems like a popular growth option and not always get the return you’re looking for, especially when scaling. He adjusted his approach to play the long game and focus on important but not urgent growth methods. As he says in the interview, once something becomes urgent, it’s too late. He built out a multi-year roadmap that would allow continued growth through different channels.

That experience also helped him when RentoMojo had to make dramatic shifts when COVID happened. They decided to implement a subscription pause, which reduced churn by 25% and played a significant role in helping the business continue to thrive even during the lockdown.

Hear more on Dharmesh’s story, including how culture was the most critical driver of growth at Amazon, how he became the odd one out in his family and didn’t work on the family business, his time management, and so much more on this episode of How I Grew This.