Over the last few months, there have been a lot of dramatic, unilateral moves in mobile tech.

To name just a few:

In each of these cases, the underlying theme is similar: a big player decided ‘we can, and therefore we shall’. You may or may not agree with the merits of any particular move, but that’s kind of the point…the parties making these calls believe in what they’re doing, and believe they have the the weight to make it happen.

Most of us do not have $2 trillion in the bank, or the power to arbitrarily shut down an app for an entire country. But the good news is that the mobile ecosystem is not a dictatorship, and no single actor has a moral claim to decide what’s right (even if some currently have control over what is possible).

All of us still have a voice, which is why it was so interesting to see today’s announcement of the new Coalition for App Fairness. To be clear, many of the names behind this coalition are multi-billion dollar corporations themselves, which means they are only ‘small’ in comparison to Apple and Google. But this is quickly shaping up to be the most well-organized rebellion these platform gatekeepers have ever faced.

The IDFA Apocalypse is on hold…but don’t get comfortable

Someone, somewhere within Apple Park finally pulled the emergency brake.

The news was buried (almost like an afterthought) as part of another announcement, but the IDFA gets to live for at least another few months.

I’m quite certain that the team responsible for Apple’s IDFA plan sincerely believes that they are doing good for the world. They don’t understand fully the mechanics of the ecosystem they’re blowing up (which they’d probably say is a good thing), but they are believers and they’ve found a home at one of the largest corporations on earth — one that is willing to throw its weight around to make these beliefs real.

I also have a feeling that the outcry they triggered caught quite a few other Apple departments off guard, and some coalition finally figured out how to wrest back control over the steering wheel at the eleventh hour.

Whatever the reason, this is just a temporary respite. These changes are still coming, and they are still going to kick off one of the most disruptive paradigm shifts the mobile ecosystem has experienced to date. It’s just all going to happen in slow(er) motion, instead of as part of a mad dash to have something ready in time for September 16.

The Great iOS 14 Reprieve (For Now)

Our team at Branch compiled this guide to everything you need to know, now that the apocalypse is on hold for a while. Here’s the 30-second summary:

There has been plenty of coverage of the on-again-off-again plans to ban TikTok and/or WeChat in the US, and I don’t have much to add there (though this article is a fairly good summary that actually digs into the mechanics of how it would happen).

What is worth a thought: how a ban could actually play out within the mobile industry itself. Over the last year, TikTok has rocketed up to become one of the top-performing app ad networks. If TikTok vanishes overnight, all that ad spend won't just evaporate…it’ll be reallocated somewhere else.

This article originally ran back in July, but it’s worth a second look now.

TikTok reveals details of how its coveted algorithm works

When users open TikTok for the first time, they are shown 8 popular videos featuring different trends, music, and topics. After that, the algorithm will continue to serve the user new iterations of 8 videos based on which videos the user engages with and what the user does.

You have to believe this was carefully sanitized by the TikTok PR team, but I can’t recall seeing even this much primary-source, granular detail on exactly how a major social platform triangulates the interests of its users.

At their Time Flies event last week, Apple dropped the GM versions of both iOS 14 and Xcode 12. And then announced that the public iOS 14 release would be the next day.

Why is that a big deal? Even though the betas have been available all summer, Apple can (and often does) delay or change parts of a major OS release at the last minute. More importantly, beta versions of Xcode can’t be used to submit app builds to the App Store.

Usually developers get a week or so with the final GM version of both the OS and Xcode, which gives them a comfortable window to do final testing and then submit new versions of their apps in time for the general public.

Not this year. Which meant a lot of grumpy, incredulous developers pulling all-nighters.

It is perhaps the ‘original sin’ of the mobile app ecosystem that content is firewalled off from the outside world by default. iOS’s Spotlight has long been the premier cross-app search experience, but even that is sadly lacking compared to most users’ expectations.

If universal search experiences like this one from OnePlus actually catch on (assuming they work…), it could finally free content from the prison of an individual homescreen icon. That’s a big step toward bringing back the openness of the web, and reducing the monopolistic power of platform gatekeepers like Apple and Google.

Planet Money is one of the most popular podcasts in the world for a very good reason: they do an incredible job of tackling really complex topics to get at the most interesting kernel of the story.

Here, they're taking on the battle between Epic (Fortnite) and Apple. If you’ve been following the story already, you probably won’t learn anything new here, but it’s still a delightful 20-minute listen.

To me, this situation is like a game of chess, and both sides are grandmasters with very different approaches to strategy. Who wins? Will it be the hyper-efficient corporate machine, or the renegade storyteller with a master plan? On the surface, Epic has everything to lose...but it sure feels like Apple keeps stumbling right into their traps.

I've commented before on the ecosystem parallels between the Chrome Web Store and the App/Play Store.

Turns out there will soon be one fewer similarity: while Chrome has long allowed alternative payment methods, those will soon become the only option — Google is getting rid of the official Web Store payments API.

This probably doesn't set any sort of precedent…but it's interesting to see the models diverge.

Why the humble QR code is enjoying a marketing revival

QR codes have been around for decades. But for much of the world, they’ve always remained a niche curiosity.

That’s suddenly changing, thanks to COVID-19. And combined with deep links, QR codes aren’t just for website URLs anymore — they can easily become a magic connection between an app and the physical world.

Speaking of QR codes, ever wondered what goes into creating all of those black-and-white patterns?

It’s admittedly nerdy, but here's an interactive peak at the process.

Ask HN: Why is Reddit on mobile so obsessed with making me use their app?

The Hacker News audience is certainly not an unbiased sample of the user population — they trend toward ‘savvy’, to put it mildly.

...which is why it's fascinating to read through this discussion thread on the perception of a relatively aggressive web-to-app strategy. It clearly works or Reddit wouldn't be doing it, but a certain subset of users seemingly will refuse (and loudly protest) on principle. 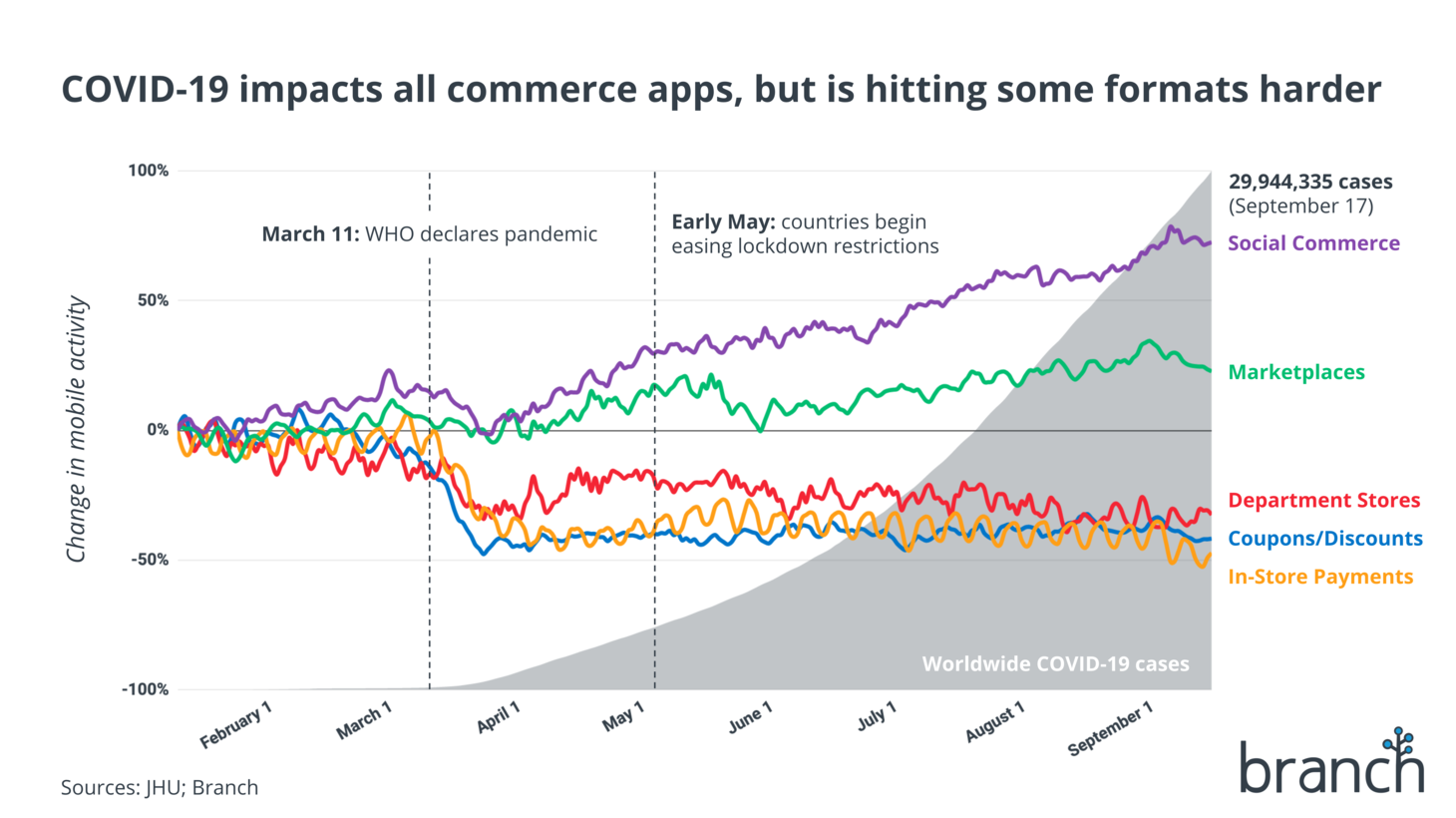 Social Commerce (think peer-to-peer social shopping apps like OfferUp, Carousell, Depop, and so on) clearly seem to be the breakout success of the COVID era.

This article comes with an opinion, but it also illustrates an under-explored angle about Apple's IDFA deprecation: the IDFA was a de facto industry standard, even if a single company held the power to unilaterally blow it up.

You can agree or disagree with the morality of Apple’s decision to kill the standard, but that doesn't change the reality of the effect.

While he might not say it himself, our next guest Varun Dubey was able to have an extremely successful career leading the marketing for some of the fastest growing tech companies in India because of two things: being empathetic and analytical. In the early days of his career writing for “Digit” Magazine, he learned that many people only had a few hours of energy to use a day. Later at Qualcomm, he learned that many people had to choose between paying to charge their phones or eating that day. In those instances, he learned that truly understanding the user was critically important for achieving immense growth to hundreds of millions of users which he achieved at Practo.

He also took a much more thorough approach than most when it came to tracking. At one point Varun stopping all marketing activities to make sure the entire site and product tracked all the way to billing. Once they did that they realized why users were bouncing and were able to get $2 net revenue for every dollar spent, which made the CFO their biggest advocate.

More on Varun’s story including how he helped drive growth for a new category, his thoughts on Apple’s decision on IDFA, and how the marketing world has completely evolved from TV to direct response.