When Apple triggered the beginning of the IDFA Apocalypse at WWDC in 2020, it was clear to anyone paying attention that it would be only a matter of time before Google brought something similar to Android.

This week, we found out what that 'something' would be: Privacy Sandbox on Android (yes, that appears to be the official name, and yes, I also think it sounds a bit contrived…but I'll explain the reason for that in a moment).

You've probably already heard something about Privacy Sandbox over the last few days, but I'd understand if you hadn't: to borrow a meme from last year's popular Loki miniseries, if the iOS 14 privacy changes were a nexus event that went straight for the red line (multiversal chaos — we all remember the disruption that came after iOS 14, because we're still living through it today), then Privacy Sandbox is a variant that has already been successfully pruned.

The main subject of today's newsletter will be getting you up to speed on what Privacy Sandbox is, how Google's announcement has been received so far across the ecosystem, and what it means for the future of the mobile industry.

First of all, the reason for the somewhat contrived name (Privacy Sandbox on Android) is that there is already a web version of Privacy Sandbox, introduced way back in August of 2019.

The Android version of Privacy Sandbox consists of four design proposals, which are a good (if semi-technical) read. You can find them here.

The responses so far have fallen broadly into four different categories:

What Is Android Privacy Sandbox? Is This The IDFA Apocalypse All Over Again?

I'm slightly biased because I wrote it, but if you only read one article about Privacy Sandbox…make it this one.

This blog post explains the various pieces of Privacy Sandbox, its history, the rollout timeline, and how it compares to ATT on iOS. I also address a number of other FAQs we've heard so far.

RIP GAID: Privacy Sandbox is coming to Android. What advertisers need to know.

If you read a second article, this should probably be it. A good breakdown of the different parts of Privacy Sandbox, including the ad targeting components (which my overview above doesn't really get into).

To round out the top three, if you'd like a really solid teardown of how the attribution components of Privacy Sandbox will work, this is worth your time.

Next, we have an example of a much more skeptical take (another is here). The thrust of these naysayers seems to be around three things:

In other words, they're interpreting this is a cynical move by Google to head off regulatory scrutiny, while keeping the 'tracking party' on Android going full-frenzy.

I think this is wrong for several reasons:

Ultimately, nothing Google introduced here was going to be good enough for everyone: when it comes to privacy, the mainstream take seems to be that Apple can do no wrong…which means even if Google had announced a full, point-for-point photocopy of ATT, it would have been cast as insufficient simply because it's coming from a different source.

This is an example of A Very Bad Take™ from a mainstream reporter who simply didn't understand the announcement, didn't read the the documentation, and took the easy headline of casting this as 'ATT for Android'.

For evidence of why this is not correct, we need go no further than this supportive tweet from Meta's own VP of Ads and Business Product Marketing, Graham Mudd. Yes, there will certainly be some impact compared to the status quo, because 'walled garden' advertisers (like Facebook) currently rely on user-level identifiers like IDFA and GAID to power the feedback loops that let them target and optimize ad campaigns.

Universal user-level IDs are a relic of a previous era that are going extinct one way or the other — almost no one seriously disputes that at this point, so the real discussion is around how to find alternatives that give acceptable user privacy protections while still allowing apps to function. The cost of getting that wrong? The bad behavior simply goes underground.

Finally, one of the (legitimate) concerns about Privacy Sandbox is timeline and scope-creep: its web version was announced two and a half years ago, and nothing has really changed yet.

Consensus-driven changes are always going to be slower than autocratic decisions, but one big reason for the delay is that Privacy Sandbox has been under investigation for the last year by the UK's competition regulators. That was finally cleared up last Friday.

Google usually announces Android-related changes on Wednesdays, and Privacy Sandbox came to Android the very first Wednesday after the UK's investigation was closed. Probably not a coincidence?

Privacy Sandbox isn't the only privacy-centric attribution proposal floating around recently — another is IPA (Interoperable Private Attribution), from Meta and Mozilla.

I think this proposal has a lot of good concepts, and it's worth following along. I also think it faces a long road to adoption. Unfortunately, the concept of 'user privacy' has become too much of a mega-corporation talking point, and it seems unlikely that all of them will be willing to cede control to an independent standards body anytime soon.

The drumbeat of 'reasons why Google search is becoming worse' has been going on for years, but this is a solid collection of actual evidence.

A big one that's missing: users are moving to mobile apps, but Google search isn't. In fact, a big reason why Google's project to include app-only content in search results got put out to pasture was apparently concerns by ads PMs that it would cannibalize web traffic.

Comparing Privacy Sandbox with the iOS 14 privacy changes (SKAdNetwork and ATT), I think one of the biggest differences is philosophical:

In practical terms, the outcome of the iOS approach is that advertisers are stuck trying to make sense of two totally separate, unreconcilable data sources (SKAdNetwork and consented user-level data). Since there is no way to merge this data on iOS, the most common solution right now is displaying both side-by-side…which is what Adjust is describing here.

Adapting ahead of regulation: a principled approach to app stores

Microsoft is wading into the topic of competition on app stores again.

While they are no longer a meaningful player in the world of mobile, this is still a savvy positioning move on their part (for a more in-depth analysis of why, read this).

The original Mobile Growth Stack (from 2014) is legendary — one person was telling me this week about how 'jaws dropped in the room' the first time it was introduced — and led pretty directly to the founding of Phiture by its creators (today, one of the most highly-regarded mobile agencies around).

Now, Phiture is back with a full renovation for 2022. You should take a look at it. 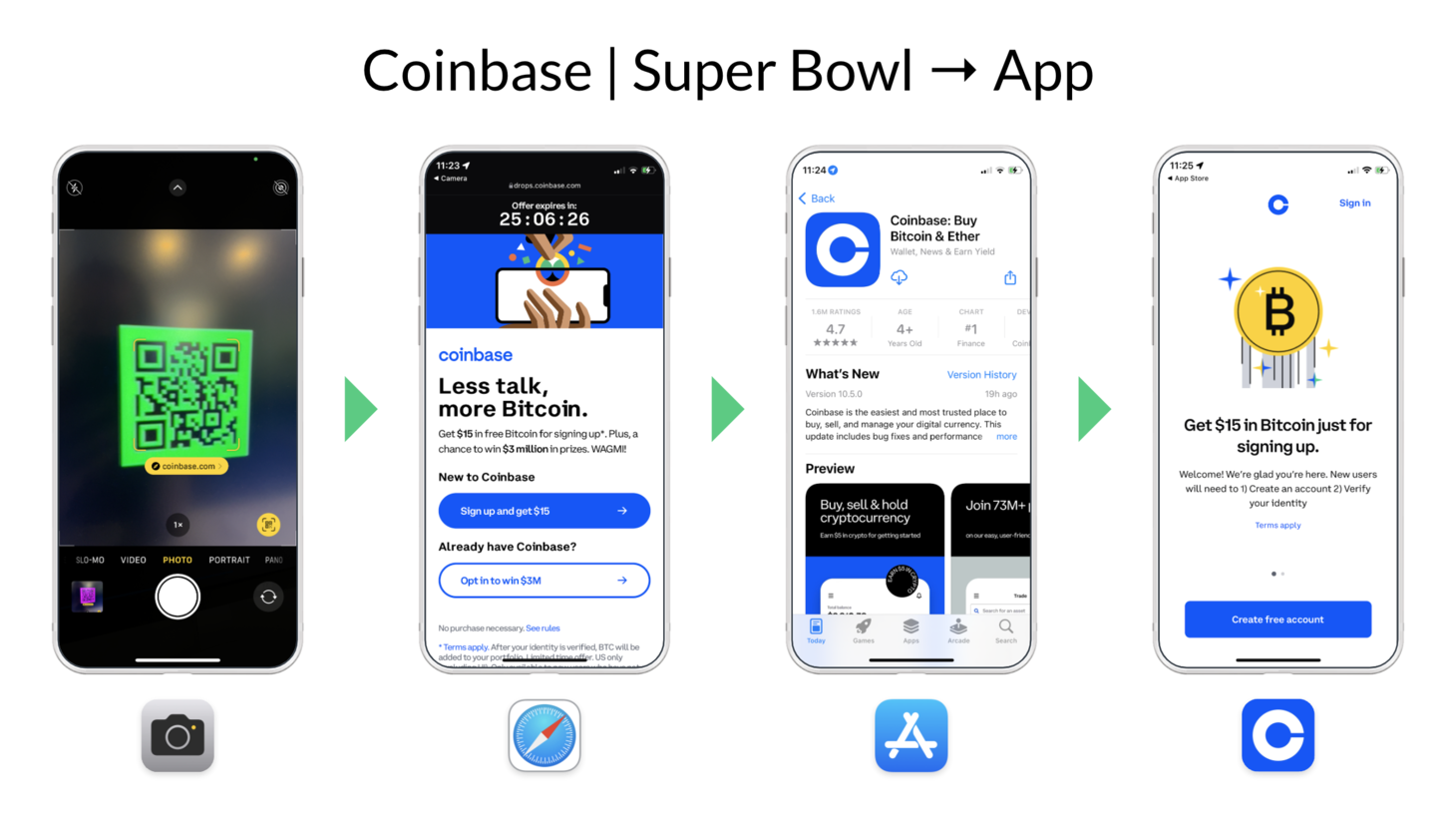 How Coinbase Did It: A Teardown of the 2022 Super Bowl QR Code Commercial

At this year's Super Bowl last weekend, crypto was everywhere.

Coinbase got most of the follow-up buzz thanks to a quirky commercial that featured nothing more than a simple, color-shifting QR code bouncing around on a black screen. Here's how it worked behind the scenes.

One of the most "awwww" things you'll read all week, I promise.

You need to drive member value when launching a new feature or app. LinkedIn puts a lot of effort into ensuring that the platform is valuable to everyone with a job or looking for a job.

Working on mobile growth preloads as a strategy, Martijn Lancee advises developers to launch a test with Digital Turbine and ironSource to understand how preloads could work for them. The challenging part is that you have to build that trust in time.

Converting desktop and web users to start using your app offers more engagement and monetization. To convert users, you should constantly make effective app banners and let your users know about the benefits of using the app.