A couple days ago, the latest issue of This Week in Apps (a newsletter from Ariel Michaeli at AppFigures, and one of my favorite weekly reads) published data that appears to show Apple purging over 420,000 apps from the App Store...right as AppTrackingTransparency went into broad effect with the launch of iOS 14.6 in June.

The hypothesis is that this was a massive, ATT-related enforcement crackdown by Apple.

While the timing is certainly coincidental, I'm skeptical about this explanation for a couple of reasons:

Granted, most of the apps in question here would have been the longest of the long tail, but the ATT rollout was one of the most closely-watched App Store developments in years. It's implausible that almost half a million of them could simply vanish because of 'ATT violations' without chatter surfacing somewhere.

In my opinion, it's much more likely that Apple simply decided it was time to clean up abandoned apps again, and they felt this was a good opportunity.

In any case, it's water under the bridge at this point. Let's dig into some more recent news!

The perilous mythology of Brand Marketing for digital products

“Brand marketing” is often interpreted deductively by marketing teams as, “all marketing activities that aren’t immediately measurable,” and thus it exists as whatever isn’t classified as direct response. That’s obviously misguided.

On mobile, I feel a major contributing issue is that last-touch attribution makes it very difficult to assign value to marketing activities that aren't quickly followed by a conversion. Multi-touch attribution was supposed to solve that, but MTA is the promised land that never really arrived on mobile (though next-gen modeling approaches may help in future).

A good article with some thought-provoking points.

Predictive marketing: How to do more with less

Speaking of modeling, a nice overview from AppsFlyer on one specific type: predictive analytics.

The type of 'modeling' getting most of the airtime in digital right now is attribution modeling, which is generally a backward-looking analysis to answer questions like 'what happened and why?' In contrast, predictive modeling involves using historical/partial data to create forecasts, answering the question 'what will happen in future?'

As access to raw data continues to become more difficult, both will be useful tools for making business decisions.

Google is already preparing to do this in South Korea, as a result of recent legislation there.

Commissions on outside payment methods are something most analysts agree are specifically allowed under the terms of the Epic v. Apple ruling, but 'allowed' and 'preferable' are quite different — one theory I've seen is that this filing is simply leverage, intended to get a stay on the ruling that is due to allow links to external payment methods starting on December 9.

Bitly has become almost synonymous with link shortening in the public consciousness, and QR codes solve the offline-to-digital gap of bringing links into the real world. With COVID finally making QR codes part of everyday life in the Western hemisphere, this match-up is an extremely logical move.

WebKit has rolled out another update to the PCM (Private Click Measurement) framework, which is the web-based counterpart to SKAdNetwork.

The key enhancement here is that PCM can now be used for conversions inside SFSafariViewController (in addition to the main Safari app).

If that sounds arcane…it is. This means PCM covers another flavor of the app-to-web conversion flow that is critical to major walled garden networks like Facebook, but neither PCM nor SKAN yet supports the much more common web-to-app conversion flow that many mobile marketers care about (the WebKit team says they're still working on it).

What apps are we missing out on?

Some business models just don't really work within the limitations of the current in-app purchase systems from Apple and Google.

This article explores a few of those, and shares some thoughts on what things become possible once third-party payment systems bring additional flexibility.

DuckDuckGo Wants to Stop Apps From Tracking You on Android

This product is being cast as 'AppTrackingTransparency for Android', but that's not quite right — it's actually a VPN-esque system, similar to a number of others already on the market (for example, the third-party Lockdown Privacy service on iOS).

The premise of solutions like these is basically more like an ad blocker: by re-routing all outgoing network requests from an app, it's possible to block traffic to any URL flagged as a 'tracker' on a static list.

Obviously, the definition of 'tracker' is subjective, and this is a sledgehammer-type solution that can have sledgehammer-type effects on app functionality: one of the app categories that DuckDuckGo currently excludes is 'all mobile games', because they found too many of them stopped working.

Clean rooms, explained: How they became the buzziest tool in ad tech

With the increasing impact of privacy regulations, limitations on mobile device IDs, and looming deprecation of third-party cookies, 'data clean rooms' are becoming a hot topic. Like Switzerland for data, they promise a solution for aggregated audience insights, without requiring brands to expose PII across companies.

Of course, user consent is still technically required, and a clean room is not a silver bullet...

“A clean room is not a washing machine, you cannot throw your data in there, throw a tide pod in, and think that it’s okay to use […] Be very cautious about being told that a clean room is going to solve all your problems.”

Duplication of keywords should be avoided. Only the last occurrence (in the app name, subtitle, and keywords fields combined) is considered meaning it will get less weight.

Mobile and desktop UIs have evolved a lot over the last few years. If you like pretty comparison visuals that show the differences (and similarities!) across platforms, this article is for you.

"Tiny signs that, to me, show that an iOS app’s probably being designed and engineered primarily for cross-platform alignment…"

Bridging the gap between UI trends and cross-platform development considerations, here's a nice list of things that are easy to miss but often frustrate users. 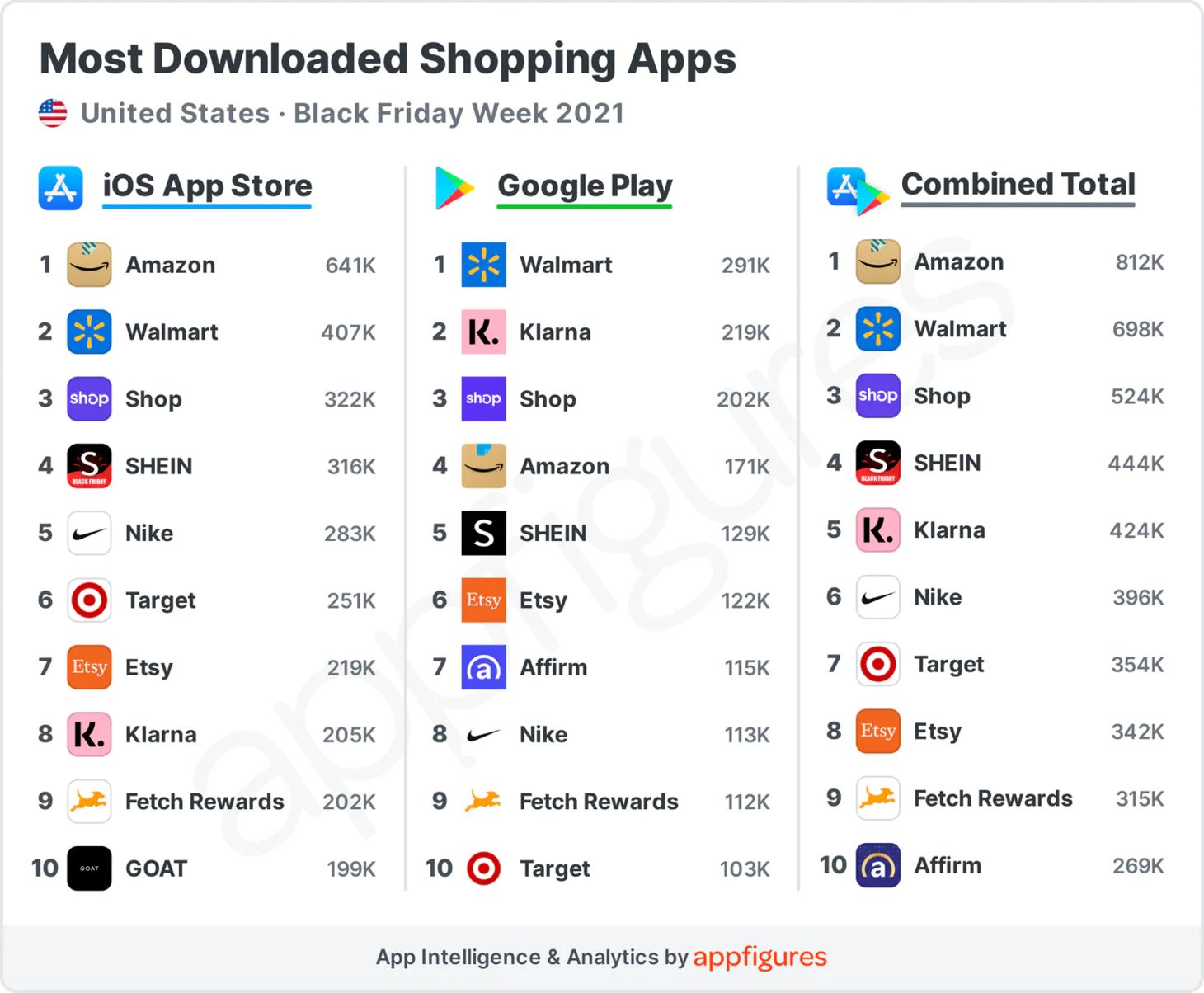 As mentioned at the top, This Week in Apps is an excellent weekly read.

In the latest issue — aside from the disappearing iOS apps discussed above — this breakdown of top US shopping app downloads around Black Friday caught my eye. It's fascinating to see the demographic differences (which we already all know about) show up in download data like this.

It's not technically a podcast (I'm cheating a bit this week), but I think you'll still love this recording of Mada's highly-attended WebSummit talk from a few weeks ago. It covers top industry trends and today's best strategies for mobile growth.