As it does every year, WWDC this week brought a host of exciting updates to iOS. As usual, you can argue that many are not exactly new to the world, but Apple has the (perhaps unique) ability to dramatically accelerate mainstream adoption of things that were previously niche.

When you combine that product execution with video production quality that is honestly almost Hollywood-worthy at this point, it's not hard to understand why Apple ends up with an outsize impact from every announcement they make.

For me, the most notable news from this year wasn't any specific feature — rather, it's how the updates combine to demonstrate the continuation of two long-term trends:

Whether or not you agree with it, Apple clearly has a vision in mind for where they want the iOS ecosystem to go.

If you weren't following along with the WWDC announcements this week in real time, here's a recap of the main highlights.

One major thing missing from this article is a summary of the new App Store features, which you can read all about here instead.

Right after the WWDC keynote wrapped, this interview came out. It's an embargoed exclusive with Craig Federighi, which means it's quite closely aligned with Apple's own messaging, but nicely summarizes the new developments.

The end of the track(ing): WWDC 2021 summary and what iOS 15 means for mobile product managers & marketers

As for what all this WWDC news means for mobile growth, join Peggy Anne Salz (from MobileGroove) and me this Thursday for a discussion.

We'll recap the announcements, and dig into the implications both now and over the longer term.

Nine things we learned from the Epic v. Apple trial

Arguments in Epic vs. Apple have been over for a few weeks now.

We probably won't see a verdict until later in the year (though that hasn't stopped observers from trying to make predictions), but plenty of juicy tidbits came out during testimony to keep us intrigued in the meantime.

One of the biggest challenges with SKAdNetwork has been that ad networks were the only party able to receive raw data.

In iOS 15, that changes: app developers will be able to receive a copy of the winning postback too. This is great news, both for reducing technical complexity and ensuring transparency.

The traditional Apple Search Ads placement is almost uncannily well-suited to high conversion rates, so anything else will appear worse in comparison. That said, my sense is the new format really shouldn't be quite as bad as this report suggests, which means Apple likely has some room to optimize.

Going forward, any site that delivers a “great page experience“ on mobile will be boosted...which is how it should have been all along.

Perhaps trying to beat Apple to the punch on user privacy announcements (this news came during Google I/O a few weeks prior to WWDC), the beta of Android 12 also includes its own privacy dashboard similar to what is coming in iOS 15. It also introduces iOS 14-esque usage indicators for clipboard/microphone/camera, etc.

This isn't the only privacy-related news for Android either — the new version will make a change to GAID behavior that essentially replicates what iOS did with Limit Ad Tracking back in 2016, and the Play Store will soon have a new safety section similar to the App Store's privacy nutrition labels.

Android 12 is also coming with a new design system. It's obviously a descendent of Material Design, and distinctively different from the current design language on iOS.

This article has some visual breakdowns of what's new. 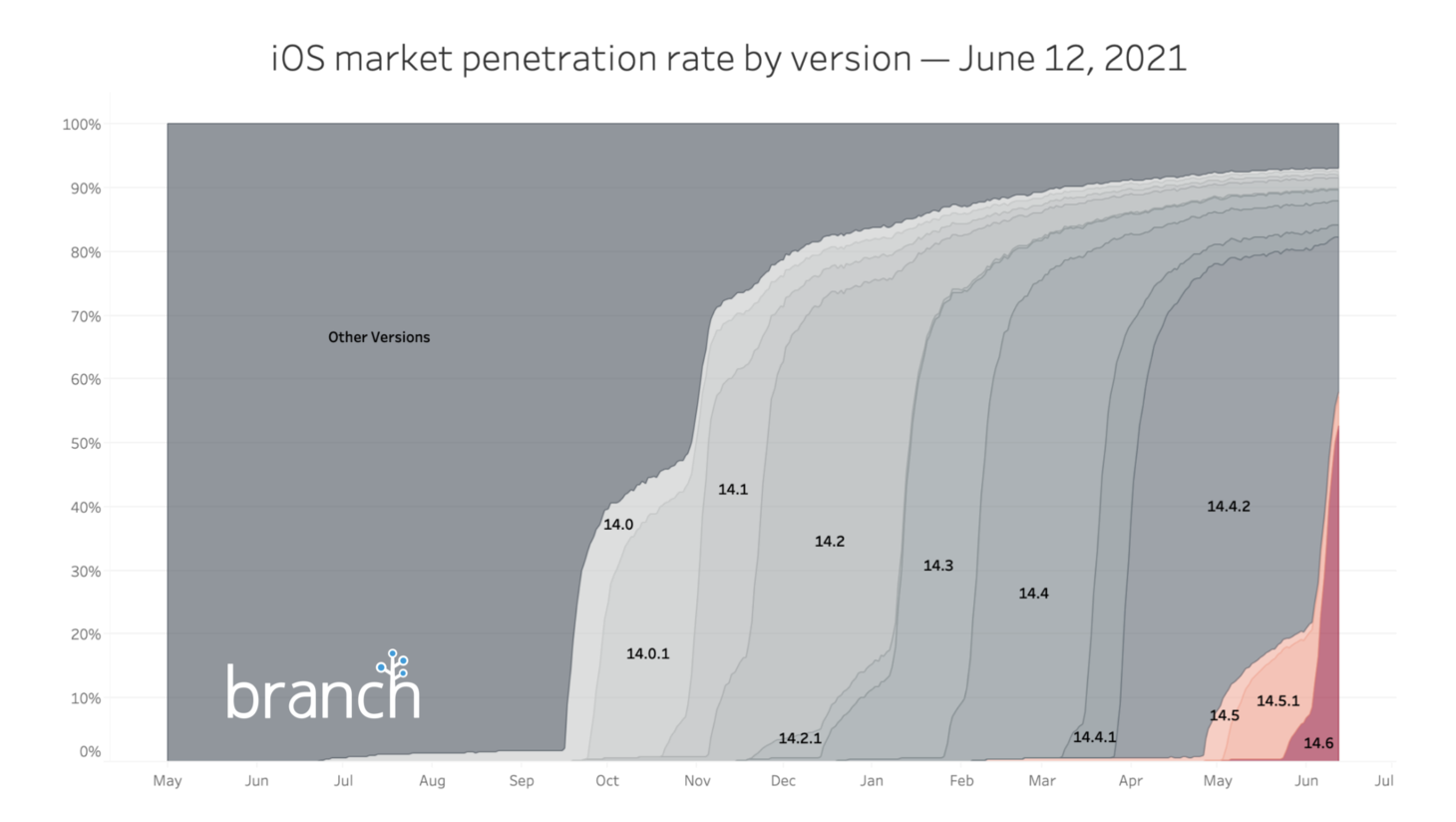 AppTrackingTransparency-enabled iOS versions (14.5+) are now approaching 60% of all sessions.

Why a Mediocre Keyboard App Is Topping the App Store Charts

When a line on your graph goes through the roof, there's always a reason…even if you have to do some old-fashioned deduction work to figure out why!

How Teams are Adapting to a Post-iOS 14 World