This is probably one of the juiciest newsletter issues to date (I even held it for a day to include a bombshell article that only came out late last night), but before we get to all that…

Nominations for the 2021 Mobile Growth Awards are now open! Think of it a bit like a cooler version of the Webbys, with a much less confusing website.

There are eight award categories:

We have some really impressive judges lined up for this, including industry thought leaders from Reddit, Calm, Google, and Credit One Bank to name a few (seriously, go look at the landing page). There will be an awards gala, and the winners get featured in a whitepaper on the most innovative thought leaders in mobile growth (see last year's version here).

All we need now are nominations from you. And yes, you can even nominate yourself!

Over the last few weeks, I've seen a flurry of discussion around attribution theory, and how this plays into changes happening in the digital ecosystem. I find this whole topic fascinating, so that's where we're going to start today!

Most of these changes are 100% about finding a way to still get some data as tighter privacy polices descend — the companies doing the pitching might frame it as better for user privacy (and in many cases, it genuinely is), but few of them would be investing in this if the status quo weren't getting steadily eroded. Under the hood, these are tectonic shifts designed to reset marketers' expectations that 'campaign data' connects directly to anything observable from outside the black box.

The truth is that last-touch attribution (still the de facto standard on mobile) has always been the-least-bad-option-that-sort-of-works. Multi-touch was a promised land that never really arrived for most, and with universal identifiers like the IDFA now an endangered species, true MTA (especially across channels) is impossible: it's an unrealized dream left over from the old world of 'more tracking is the answer'.

It's clear that modeling and incrementality-based measurement will be key parts of the future of digital marketing (along with more robust on-device techniques), but there is still an inherent conflict between privacy and transparency.

What if Performance Advertising is Just an Analytics Scam?

First, a meta question that keeps coming up: is performance advertising even worth the investment?

As usual for Rand Fishkin's work, this piece got plenty of attention. It's perhaps somewhat hyperbolic, but surfaces some good points (and it's not the first time that such points have been raised recently). There is already at least one exceedingly well-articulated rebuttal floating around.

The truth is almost certainly somewhere in the middle: ads can be effective, and many types of advertising are likely less incremental than some would like you to believe.

The future of attribution is data-driven

From Google, we're seeing a lot more attention going to modeling — in fact, 'data-driven' attribution (what a terribly confusing name) has just become the default attribution model for many conversion types in Google Ads (not for in-app mobile conversions yet, but that's apparently coming soon).

It's obvious that Google feels modeling is the future, but it's not as simple as that for everyone else. Google celebrates examples of 'better campaign performance' all the way through this announcement, and that might in fact be true...but because these numbers don't correspond to independently-verifiable metrics, there's no longer an easy way to validate what comes out of the black box. It could simply be that Google's 'data-driven' attribution algorithms now have the flexibility to find more conversions to claim credit for.

How Conversions are Modeled in Google Analytics 4

Good write-up of how Google actually does conversion modeling, and what the results look like compared to what it's replacing.

This is technically for Google Analytics rather than Google Ads, but it's the same background fundamentals.

"Facebook is going all in on MMM: here are the major takeaways from a 1hr webinar I was invited to."

Facebook is also investing heavily in modeling. I'll admit that some of the technical details in this thread are wonky enough that even my head is swimming, but their end goal is to solve the same 'last-click doesn't cut it anymore' problem that Google is also tackling.

In the meantime, Facebook's existing data is kind of a mess thanks to ATT, and it's causing plenty of disruption for advertisers.

This is a great summary of what's going on, but nothing groundbreaking that hasn't already been reported. 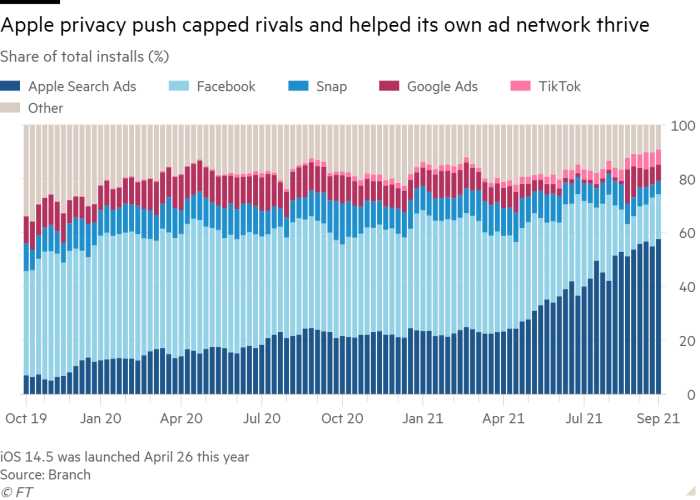 Apple’s privacy changes create windfall for its own advertising business

Here is the article that delayed this newsletter for a day. It's a meticulously-sourced analysis of just how much growth Apple Search Ads has seen over the last year.

This graph reflects the measurement data that is available to advertisers when Apple's new systems and policies are implemented as Apple designed them, and the result is a (fairly predictable) migration to places where advertisers can still get better performance reporting.

PS, if you don't have a Financial Times subscription, you can try Googling the article title. The reporter also summarized key points in a very popular Twitter thread.

The verdict of Epic v. Apple is still reverberating around the room, and while Apple filed a last-minute appeal that will certainly delay the implementation of any rules changes, that hasn't stopped payment platforms from preparing for a variety of eventual outcomes.

RevenueCat published an exquisite write-up of takeaways and open questions, and Paddle already has a super-slick landing page for their unreleased 'Paddle In-App Purchase' product.

Some seem to think this was a big conspiracy to get a competitive edge on the rest of the market.

Personally, I doubt that was the case...one of the promoted benefits of AppLovin's MAX product was apparently 'Global SKAdNetwork Reporting' (basically, think 'MMP-lite'), and this stuff is such a pain to configure that it's not hard to imagine an engineer somewhere inside AppLovin thinking an automated config step would be a huge help to confused game developers.

That said, it is a pretty obvious conflict of interest — while it totally makes sense for an independent party (like an MMP) to be aggregating SKAdNetwork data on behalf of the advertiser, it's not a good look when a single ad network tries to do the same thing (especially without transparent notification that they were doing so).

Why did AppLovin buy MoPub?

TL;DR: because AppLovin wants to control every part of the stack that isn't already inside a walled garden.

The general consensus seems to be that this made a lot of sense for both AppLovin and Twitter. While MoPub may have been a huge revenue driver, it was never really a clear strategic fit for Twitter. ATT made it just not worth the energy, especially now that Twitter is refocusing on their core social platform (the Fabric developer toolkit was already sold Google years ago).

If you're interested in a more wonky breakdown of benefits and pros/cons for MoPub customers, definitely read this.

This exposé article covers why Apple's failure (to date) to actually enforce the AppTrackingTransparency policy has led many in the mobile ecosystem to simply return to business-as-usual.

For a significantly more technical version of this, here's the the privacy researcher's independent writeup.

The Powerful Ramifications Of Removing Link Blockage In China

Major Chinese tech companies have been forced by the government to stop blocking outbound links to competing services.

This article explains what that means for advertisers, but there are a couple additional points to make:

Private Relay creates new challenges for deferred deep linking (that's why Branch introduced NativeLink™ earlier this year), and this week AppsFlyer revealed that they're also thinking about it: the solution they previewed is based on using App Clips to pass context through the App Store.

I've long felt that App Clips (and Android Instant Apps, which actually predate them) are a woefully under-utilized part of the app developer's toolkit, but I'm not sure they're the right tool to 'fix' deep linking on Private Relay.

App Clips are hard work to set up, and Apple has some fairly prescriptive requirements for what makes an acceptable implementation — in fact, Branch has supported exactly this user flow for several years, but very few of our customers have been interested in it (in contrast to NativeLink, which easier to enable and has been turned on by over a thousand apps to date).

In reality, it's probably better to think of this as a 'different tools for different problems' situation, because both solutions can be good for the same app, at the same time. As an example, Toast uses an App Clip for super-seamless QR code-based payment at a restaurant (just scan the code on the receipt and pay via Apple Pay), but that's in addition to deep linked acquisition campaigns for the full app (such as their incentivized referral program). 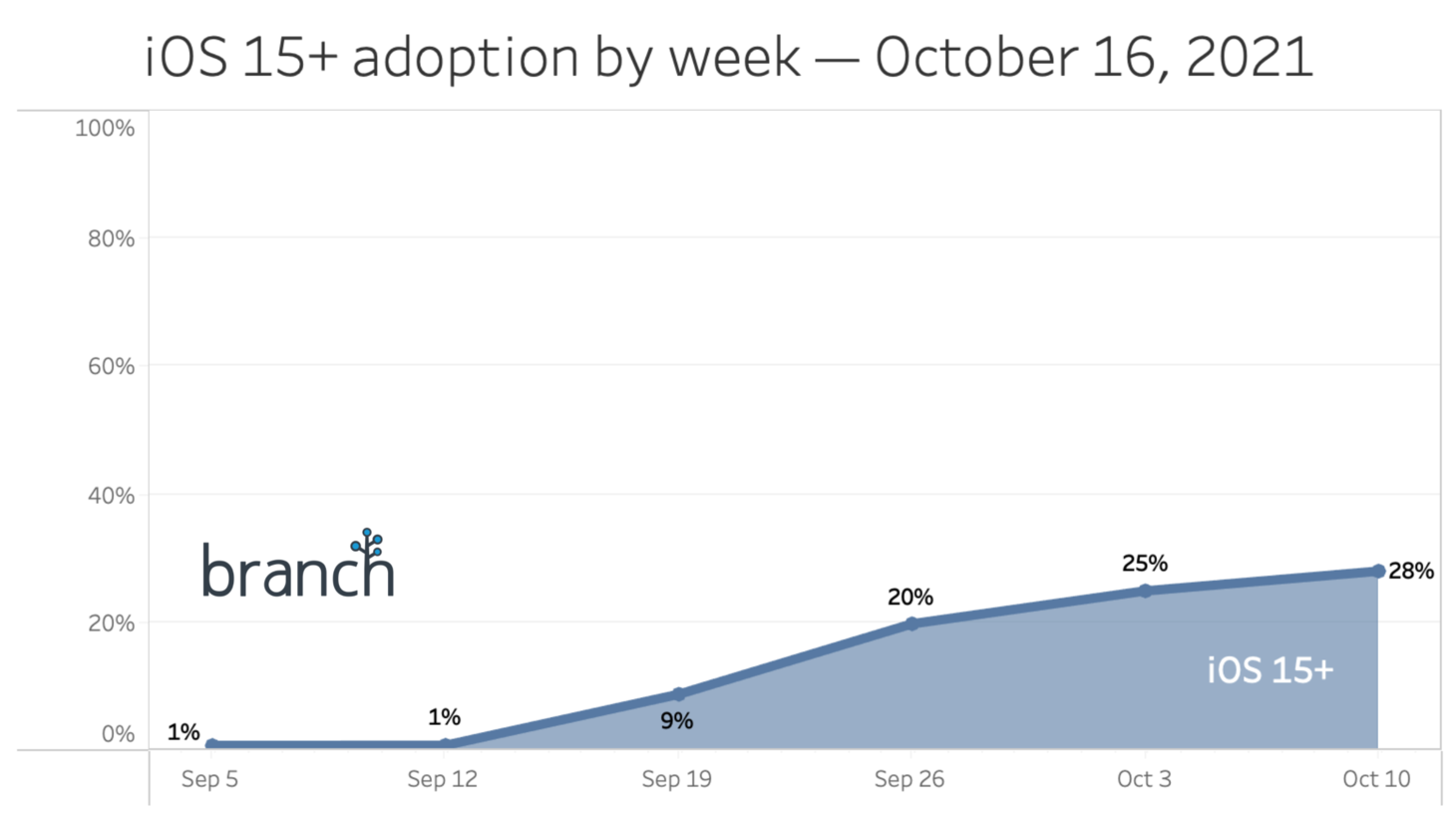 Almost a month after launch, iOS 15+ adoption is still only 28%.

For whatever reason, Apple hasn't pushed the auto-update button yet.

A great list from John Koetsier, who certainly would be one of these 30 if he hadn't written the article!

Yes, I'm blushing a little bit from being included here, but mostly because the rest of the list is so on point — these really are the people you want to be following to stay ahead of the game.

Is Your App Festive Season Ready?